Home » Moral » The king and his foolish monkey servant : A enemy is better than a foolish friend 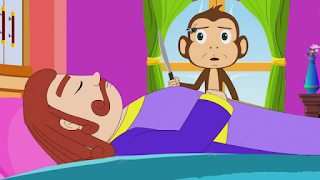 Once upon a time, there was a king in a village. He was very loving towards the animal. He has many pets, among them a monkey was also there. The king loved the monkey too much. So he uses to keep the monkey whether the king uses to go.

One day the king was taking rest at his bedroom. and before going to sleep the king told the monkey to stay there and he should see as no one can disturb the king.

While the king was sleeping the monkey was blowing air to the king as the king can sleep peacefully. Suddenly a fly came and started to disturb the king. the fly was shitting sometime on the king’s nose and sometimes the king’s cheek. the monkey tried much time to flew away from the fly but he failed.

At last, the monkey becomes angry and taken a sharp shored and desired to kill the fly. As he has failed much time to make it fly away.

Now the fly has shit on the chest of the king and the monkey tried to hit the fly with all his power with the sharp shored.

The fly flew away but the chest of the king is pieced into two, and the king dies believing a foolish one.

Moral of the story: A enemy is better than a foolish friend