The fox and crane’s invitation : Tit for tat 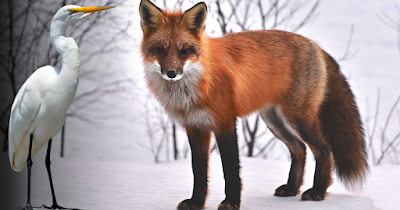 Hi, we are going to say a moral story on the invitation of the fox and the crane and the moral of the story tit for tat.

Once upon a time there were two friends one fox and another one is a crane, They used to live in the same jungle. One day the fox invited the crane for lunch.

The crane reached the home of the fox at the event date for the lunch. When the crane reached to the fox’s house, the fox was cooking at the time. The sent of the food was too delicious that it makes the crane’s mouth full of water.

Now the time came when the time came for serve. The fox served the delicious food in 2 plates. The fox licked and ate the food easily. but the crane is not able to eat that. He tried much time to eat the food from the plate but failed due to its long beak. Thus the crane has to leaved from there without eating any food in an empty stomach.

A few days later the crane invited the fox in his house for dinner. The fox agreed with that also for the food at the crane’s house.

The fox reached at the home of the crane for dinner at the invitation date. The crane was making food at that time and the sent of the food was very delicious, The delicious food was making the fox’s mouth full of water. The fox asked the crane that how much it will take to finish the cooking. The crane replied a few minutes only.

Now it was not possible to drink from the Callie for the fox. and finally, the fox has also left in an empty stomach.

Moral of the story: Tit for Tat.